Corneal surgery is performed to either repair defects (called corneal ulcers) or to remove abnormal tissue. Unlike in humans, refractive surgery, such as LASIK, is not performed in animals.

Corneal ulcers occur when there is loss of at least the top layer of the cornea (called the corneal epithelium) and are frequently referred to as scratches, abrasions, or erosions. Most corneal ulcers are treated effectively with medical therapy alone. However, those that are chronic, infected, or deep may require surgical repair.

Ulcers extending through a significant portion of the corneal thickness put the eye at risk of rupture. A descemetocele is one such ulcer which extends though 99% of the corneal stroma. These cases frequently require emergency surgery, involving either a conjunctival graft or a corneoconjunctival transposition. 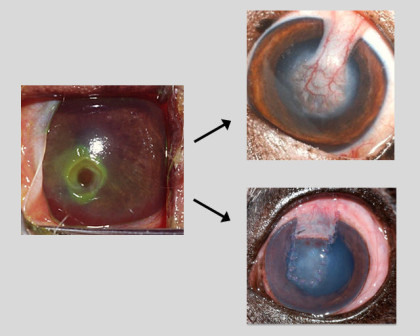 Chronic, superficial, non-healing corneal ulcers are commonly called indolent ulcers. These ulcers are most common in the Boxer, but can occur in any breed. While the ulcers are not infected, there is a healing problem. The treatment of choice is debridement of the redundant corneal epithelium and then performing a grid keratotomy or a diamond burr keratectomy. These procedures are very successful having a 85-90% success rate.