A cataract is an opacity of the normally clear lens. Cataracts can be very small (called incipient) or can affect the entire lens (called complete or mature). Pending on the degree of cataract present, vision may not be affected at all, or there may be a severe vision deficit.

Unlike in humans where age is the most common cause of cataracts, the most common cause in dogs is genetics or an inherited cataract. Many of these dogs are affected very young, less than 2 years of age. Numerous breeds are predisposed including, but not limited to Bichon Frise, Havanese, Poodle, Yorkshire Terrier, Cocker Spaniels, Poodle crosses, and many more.

The second most common cause of cataracts in dogs is diabetes mellitus with approximately 75% of diabetic dogs getting complete (vision threatening) cataracts within the first year of being diagnosed with diabetes. These cataracts tend to be bilateral and can occur very rapidly, sometimes appearing to occur overnight!

Other causes of cataracts in dogs include intraocular inflammation (called anerior uveitis), age, trauma, secondary to radiation therapy, electrocution, and others. Regardless of the cause of the cataract, the first step in treatment of a cataract is to reduce and/or prevent intraocular inflammation associated with the cataract, called lens-induced uveitis. This inflammatory reaction can be quite severe and left uncontrolled and lead to numerous adverse ocular complications including glaucoma, retinal detachment, retinal degeneration, lens luxation, corneal opacification, intraocular adhesions, and complete and permenent vision loss. Uncontrolled inflammation can prevent a dog from being a candidate for cataract surgery. Therefore, early recognition of a cataract and consultation with an ophthalmologist is recommended.

Depending on the clinical findings at your dog's ophthalmology appointment, your dog may be a potential candidate for cataract surgery. If so, pre-operative testing is recommended. Prior to cataract surgery it is imperative to know as much as possible about the overall health of the eye to ensure the best possible surgical outcome. At the Animal Eye Center of NJ, we perform three pre-operative tests include gonioscopy, ocular ultrasound, and an electroretinogram. Gonioscopy is an examination of the iridocorneal angle or intraocular drain. The findings of this exam may aid in predicting the potential for glaucoma with or without cataract surgery. An ocular ultrasound is then performed which allows the ophthalmologist to evaluate structures not able to be seen on the clinical exam, including the retina, the vitreous cavity, and posterior aspect of the lens (cataract). This test is most useful for diagnosing a retinal detachment or vitreous degeneration. Lastly, an electroretinogram is performed. This test measures the summed electrical activity of the retina, using the same principle as an EKG performed to look at cardiac (heart) electrical activity. As retinal electrical activity can correlate to function, an electroretinogram helps us determine retinal health and the potential for vision after cataract surgery. 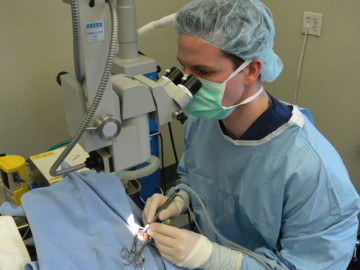 Cataract surgery in dogs is very similar to that performed in people. At the Animal Eye Center of New Jersey we use an AMO Whitestar Signature phacoemulsification unit and utilize a Zeiss Lumera T operating microscope for visualization. While the technique is nearly identical, there are some differences between cataract surgery in people versus dogs. Humans having cataract surgery are sedated (not usually under general anesthesia) and have only one eye operated on at a time. As the surgery is performed inside the eye, it is very important that the patient does not move. Therefore, in veterinary ophthalmology, all dogs are under general anesthesia for cataract surgery. As they are under anesthesia, most dogs will have cataract surgery performed in both eyes at the same time, if clinically indicated and desired. There is no significant difference in success rate when performing surgery in one versus two eyes.

Cataract surgery in dogs tends to be quite successful with a reported 81-94% success rate, with success defined as a comfortable, visual eye. However, certain dogs, dog breeds, and certain cataracts have a better prognosis than others. At the Animal Eye Center, we will discuss at length your dog's potential chance of success with surgery and all related potential risks and complications.